Read this case study from Victaulic. It explores their involvement in the design and build of a new data centre located in Bologna, Italy.

The European Centre for Medium-Range Weather Forecasts (ECMWF), based in Reading, UK, is a research institute and 24/7 operational service. It produces global medium-range numerical weather predictions and other data for its member states.The Centre plays an integral, if not completely vital, role in providing meteorological data to almost the entirety of the European continent.

Producing numerical weather forecasts is a computationally expensive process. It involves taking in data from satellites, weather balloons, buoys and radars to predict every kind of weather imaginable. This requires exceedingly large supercomputers to both drive this incredible data intake and also perform necessary analysis. Thus, to cater for the increased need for data processing, the ECMWF decided to open in 2016 an international competition for bids from the ECMWF member states to host a new data centre.

The winner of the competition was Regione Emlia Romagna (R-ER). They proposed to bring the data centre to the city of Bologna at the new Tecnopolo di Bologna site. This is a 13 hectare space for public and private research facilities.

As a result of processing thousands of pieces of information a second, data centres build up an enormous amount of heat. To combat this, Victaulic worked closely with Studio IT to create the design concept for the data centre's cooling system.

Ing. Lanfranco Ricci, Mechanical Systems, Studio TI, praised Victaulic’s proactive approach, stating: “The positive approach Victaulic took to this project was fantastic to work with. From the offset they understood what was required for the project and how best to produce a system which keep the data centre cooled and the weather forecasts running. A particular benefit was being able to use their digital prowess to build 3D design concepts.”

The piping system created by Victaulic involved the use of prefabrication offsite. Victaulic understood that by prefabricating, the system could ensure the highest level of reliability through greater quality and level of control. From this knowledge, the contractor Gianni Benvenuto S.p.A, opted for initially building offsite and installing later. 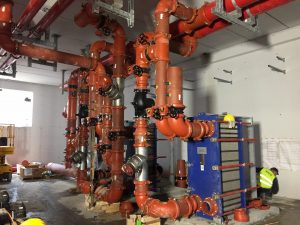 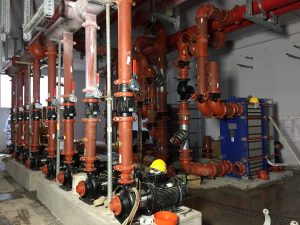 Victaulic produced the pipe designs, provided the products and were onsite to oversee and guide the construction team in how to best operate their products.

The simplicity and speed of intallation was a key reason for the chosen solution. This saved valuable time and resources. Further more, the solution provides scalability for future system changes or expansion.

In conclusion, Victaulic's work on this project will not only benefit the city of Bologna, but will provide the ECMWF member and co-operating states with vital weather data.

Find out more about Victaulic and visit their Website Sponsor listing on the DATACENTRE.ME Directory.

Sign up for your FREE directory listing here.  Promote your company by becoming a DATACENTRE.ME Website Sponsor. Please visit our Sponsorship Page for more information. You will be able to choose which level would suit your company.  Prices start at just £1,000 for 12 months visibility and a whole host of other benefits!  Alternatively, contact us here.  We look forward to hearing from you!

Get the Case Study
Company Archive
Back to all Case Studies
We use cookies to ensure that we give you the best experience on our website. If you continue to use this site we will assume that you are happy with it.AcceptDenyPrivacy policy